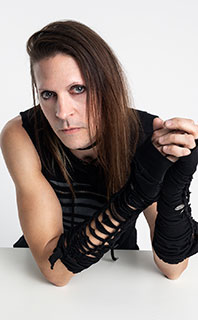 Born and raised in Charlotte, NC, Carlton relocated to Los Angeles in 1997 to pursue a career in music.

After working in recording studios for 2 years and touring extensively with Dreamworks recording artist Deadsy, he met Terri and joined Berlin in 2004.

Carlton's musical background and influences include styles ranging from rock & industrial to dance & pop. In addition to playing guitar, he is also a producer with a degree from the Los Angeles Recording Workshop, he collaborates with many other artists on remixes, and has worked with Terri on many of the upcoming Berlin tracks set to be released in the near future.