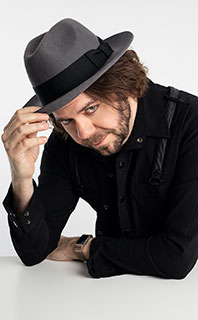 Music was a part of Dave Schulzs life from the beginning. Born in Buffalo, NY, his father wore two hats as pianist and conductor of the Buffalo Philharmonic Orchestra. His father would seat him in the orchestra pit during performances as early as seven years old. His brother Robert would soon become a Grammy-nominated classical percussionist, and his sister an accomplished rock/soul singer. Shortly after his fathers passing when Dave was 10, he suddenly took an interest in the piano that was sitting idly in the living room. Osmosis? Within six months Dave had mastered the C Sonata by Mozart, and began an obsession with Chick Corea, Herbie Hancock and, of all things, DEVO. Not too bad for an 11 year old. He obviously made the right choice. By the age of 17, he was one of the top keyboardists in his hometown, winning multiple awards consistently for seven years. Finally the big break came, when Robby Takac of the Goo Goo Dolls called and left a simple message from sunny LA: you wanna come out and tour with us for a year? In a matter of one day Dave went from playing in front of 300 in a local Buffalo bar to playing Woodstock in front of 60000. This led to a two-and-a-half year relationship with the Goo Goo Dolls that took Dave around the world twice as touring keyboardist/vocalist for the Dizzy Up The Girl tour, the landmark album that spawned five top ten singles between 98 and 2000. That experience sealed his fate. Where else do you get to open up for the Rolling Stones?